Kerry Kearney -- Ghosts of the Psychedelta" 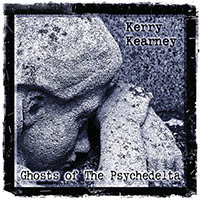 You may not have heard of Kerry Kearney, but that's one of the reasons I have a blog. Here's a tip--you need to get this cd, and you need to discover this artist. Why? Well, because Kerry Kearney is one of the very best slide guitar players out there. If you love the slide guitar work of Sonny Landreth, Johnny Winter or Duane Allman, that's fine--each of them is very good--but Kerry is as good as any of them. He plays with a musical, sweet tone with a nice swinging style. This guy should be a huge star, but he is only well-known in the New York area. Kerry lives in Far Rockaway on Long Island, and, other than a 5 year span playing with Marty Balin from 1988-1993, he has been there forever. Kerry has released a dozen cds beginning in 1996, but he has largely escaped notice outside the NY area.

On this cd Kerry presents one original song and songs by Arthur Crudup, two by Robert Johnson, Big Bill Broonzy, Lennon/MacCartney, Elmore James and Bob Dylan. He is backed by Frank Celenza on bass, Mario Staiano on drums, David Bennett Cohen on keyboards, Ken Korb on harp, and Nydia Liberty Mata on percussion. Things kick off with "Mississippi River Stomp" which is a high energy number and sounds similar to Sonny Landreth's slide work in the 80s. The second number is the standard "Mean Old Frisco" and here Kerry and the band cut Eric Clapton's version in every way. A knockout acoustic slide treatment! Next up is "Stop Breakin' Down" and here Kerry and the band just smoke the Rolling Stones' version. Kerry's guitar work is really strong here, with a sweet turn on piano by David Bennett Cohen, good vocals and harp too! Elmore James' "Louise Blues" keeps everything cooking along at a good steady boil--here Kerry really really leads it out over a fat back beat. Next up is The Beatles tune "One After 909." The is a full band tour-de-force with Kerry's guitar and singing and David Bennett Cohen's piano weaving a wonderful tapestry of song. I really enjoy the energy on this one. Next up is "The Last Fair Deal Going Down," another Robert Johnson song, and it's a strong effort with really nice guitar. I'm getting tired of hearing every band covering this one, but KK and band still do it way better than ok. Next up is "Baby Set A Date," and this one has a nice showcase harp solo by Ken Korb, strong work by the rhythm section, and a hot electric slide solo by Kerry. My favorite song on the cd is "Girl From The North Country." Kerry takes things in an acoustic direction, and is accompanied by Maria Fairchild on banjo & vocals, Dana Tillinghast on harmony vocals, Sly Geralds on bass, and Chris Cangeleri on shaker. One of the best Dylan covers I have ever heard--I especially love the penny whistle.

"Ghosts of the Psychedelta" will be available September 1st.You can buy this cd at http://kerrykearneyofficial.com  There are also several songs on you tube that you can check out. I hope people will get excited about Kerry Kearney and his music--he's really good.