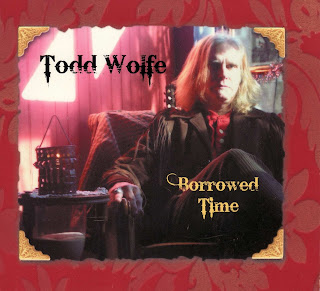 Todd Wolfe is a heavy blues guitar slinger. He was the lead guitarist in Sheryl Crow's band 1993-1998, and then he led the Todd Wolfe Blues Project, and here is a solo disc. There are a lot of things to like about this disc--some of it seems to echo Santana, some of it echoes Leslie West circa Mountain, some of it sounds like Cream. In tone and style of guitar, this disc also reminds me a little of Albert Castiglia's latest, "These Are The Days." (see my review of Albert's disc on this blog in 2007.) Both discs feature good fretwork, lots of original songs, good backing bands. They are both well worth buying.

The drumming by Dave Hollingsworth III here is a highlight throughout. Suavek Zaniesienko plays bass, keeping things full in the bottom, and Michael Fossa plays keyboards with taste and restraint. There are guest appearances on "Borrowed Time" by Leslie West, Susan Cowsill, Mary Hawkins. Susan Cowsill adds distinctive backing vocals on "California," a song co-written by Sheryl Crow. Mary Hawkins sings on "If This is Love," which is terrific--one of the best songs here. Wolfe's slide guitar work had me smiling and thinking of Ronnie Earl. "Baby I'm Down" has a southern rock, Allman Brothers Band feel. "You're Not The Only One" has a Cream vibe, with heavy echo on the vocals and very sweet guitar work. Wolfe tackles the Peter Green Fleetwood Mac tune "Oh Well" and does it quite well, with a train-pulling-into-the-station ending. The other cover here is Howling Wolf's song "Who's Been Talking," and I think the master would approve of this take.

Taken all together, this is a very good disc. If I gave stars, this one would be a 5 star disc. I'm excited about Todd Wolfe. He can play guitar great and he sings really well, and the future looks bright. This disc is on Blues Leaf Records.
Posted by Bruce at 3:58 PM

great record! an unknown gem... get it.