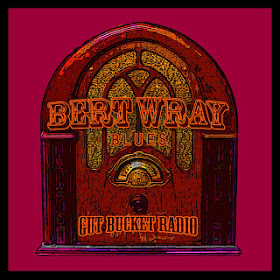 Bert Wray Blues came to me on a tip from a friend. Don de Leaumont, who has been my friend since 2009 when we met at an Emory University seminar about the music of Bob Dylan, told me one day that I needed to hear this blues album by his friend in Charlotte North Carolina. Because of our friendship I told him to hook me up with it. Don sent me "Gutbucket Radio" that same day, and I listened to the first three songs.....which was all the time I had. The next day my brain was full of other chores and other music and it wasn't for another 6 days that I remembered and listened to the rest of the album. But at least there was one bit of good news--that second day I listened to it from the beginning! The first three songs sounded even stronger than they had the first time, and there was no letdown as I heard the rest of it.

Bert Wray is the leader of this band. He wrote the seven songs, sings and plays guitar and harmonica. Filling out the band are Dave Wall, on bass; and Mitch Cooper, on drums. They play a tight, yet loose-limbed music together that is blues, and folk, and rock 'n roll and country all at once. It is also utterly captivating. There are no weak songs here, no lame-o guitar wanking, nothing that makes me reach for the remote to hit "skip." Just fine music, honestly made by real human musicians who love to play.
It really reminds me of another album I was given by a friend in about 2013: The Mojo Roots, from Columbia MO, were a fine bunch of guys and they made a really fine album they made called "What Kind Of Fool." I was knocked out. That album very rarely left my cd player for the next 18 months, even though The Mojo Roots broke up after the cd was out for about a year.
I have played the Bert Wray Blues song "Like Johnny Winter Did" on my Mo' Blues Show at www.caldoniascrossroad.com at least a couple of times, and every time I play it I have to get up and dance around a little bit in the studio. The same thing happens with the song "Got The Tennessee Blues" or "Midwood Blues" or "Whiskey In My Coffee Cup" or "Little Highway Girl".... every song here can be shuffled into a pile with your other favorite cds and it will keep things "MOVIN!
You can buy this cd at I-Tunes, and you can follow Bert Wray Blues at their Facebook page. If you are ever near Charlotte North Carolina check them out--you will be glad that you did!
Bruce at 8:08 PM